Posted at 13:38h in Uncategorized by windrose 0 Comments
0 Likes
Share

The island of Hvar, the king among the Dalmatian islands, is known since antiquity for its important strategic and nautical position, richness of historical periods, cultural and natural monuments and literature.

Due to its mild climate, warm winters and pleasant summers, it hosts numerous guests, scientists and travelers who are drawn to the lush Mediterranean nature, rich tradition and nightlife. Today, Hvar is considered one of the ten most beautiful islands in the world

TOP  SIGHTSEEING TO VISIT ON THE ISLAND OF Hvar

Petar Hektorovic’s fortress offers many beautiful views, and with its pond and pigeon above, it is the most famous building in Stari Grad. Petar Hektorovic was a renowned Renaissance poet who built this incredible structure throughout his life – for him it was as important as his literary work. In this castle came his idea of ​​a microcosm – a small, closed world where all divine creatures – fish, birds, plants and humans – have found a place to live. The fortress is also considered to be a kind of stone book because Hektorovic carved more than twenty stone inscriptions in Latin, Italian and Croatian into its walls. 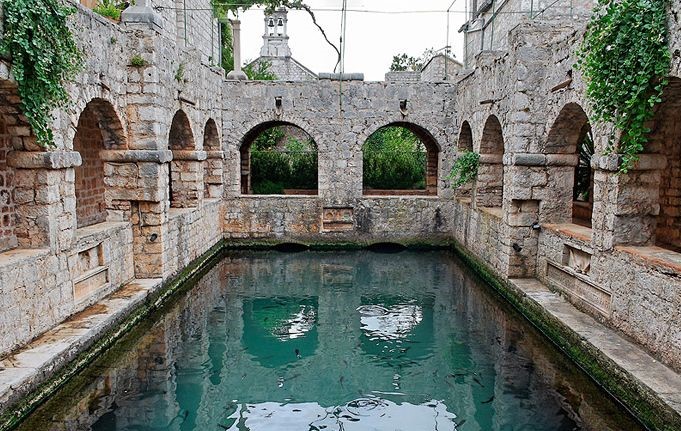 Not only is this fort a wonderful sight to behold, you will also enjoy getting there. If you walk from the square north, you will pass the main city gate or Porta di Datallo, and climb the stairs that will take you through the old part of the town of Hvar. Here they steal the palaces built in the 15th and 16th centuries, surrounded by the aromas of Mediterranean herbs, until you reach the Fortica of Hvar or, as the locals call it, “Spanjola”. It was built at the beginning of the 16th century (during Venetian rule) and was reconstructed in 1579. Today, the fort houses a collection of amphorae and other exhibits from antiquity and the Middle Ages. In addition to experiencing the original architecture, you will also enjoy an unforgettable panoramic view of the town of Hvar, its surroundings and the Pakleni Islands.

The Hvar Theater, founded in 1612, is one of the first municipal theaters in Europe. It was erected on the old Arsenal – a space to repair galleys and store various marine tools. The exterior of the theater is mostly preserved in its original form, while the interior dates from the 19th century.

The Old Town of Hvar was entered on the UNESCO World Heritage List in July 2008 and represents the best preserved ancient Greek landscape in the Mediterranean in continuous use with the same initial crops (mainly grapes and olives) that have been produced for 2400 years.

The Benedictine monasteries of Hvar have become famous all over the world for their unique tradition of making agave lace. The lace-making skills were passed on from generation to generation inside the monastery, and in 2009 it was listed on the UNESCO Intangible Cultural Heritage List. The Benedictine monastery itself dates from 1664, when two nuns came from the island of Pag to Hvar with the task of establishing a monastery. The foundation of the monastery has been advocated by the Hvar commune since 1534, and the people of Hvar themselves encouraged the construction of the monastery with their grants.

Of the many small squares in Stari Grad, the most picturesque is Skor Square. Almost as a theatrical scenery (which it actually becomes during many summer cultural events), this square was created during the 17th and 18th centuries. The space once served as a shipyard, to which this square owes its name (“skor” or “skver”). This is where mythical Dalmatia lives: the curved space is closed to workers’ houses with luminaries (skylights), sulars and staircases (stone terraces with stairs).

Trg sv. Ivana is one of the most beautiful squares from the Renaissance-Baroque period, with a small octagonal church dating from the late 17th century. The church was built in three different styles: Gothic, Renaissance and Baroque. The square and the surrounding streets were designed from the 15th to the 18th centuries, and from an architectural standpoint, along with the houses built between the 17th and 20th centuries, represent the most preserved part of Jelsa.