Posted at 10:37h in News by windrose 0 Comments
0 Likes
Share

Check in starts in 4 PM in Marina Kaštela a nice small town 10km distant from Split.  After a short navigation you come to Milna where you`re going to spend your first night on board enjoying a homemade meal and company.

Milna is a small village on the western part of the island. It originates from the 16th century and it was known for its shipbuilding where the first typical Dalmatian boat ‘bracera’ was built. 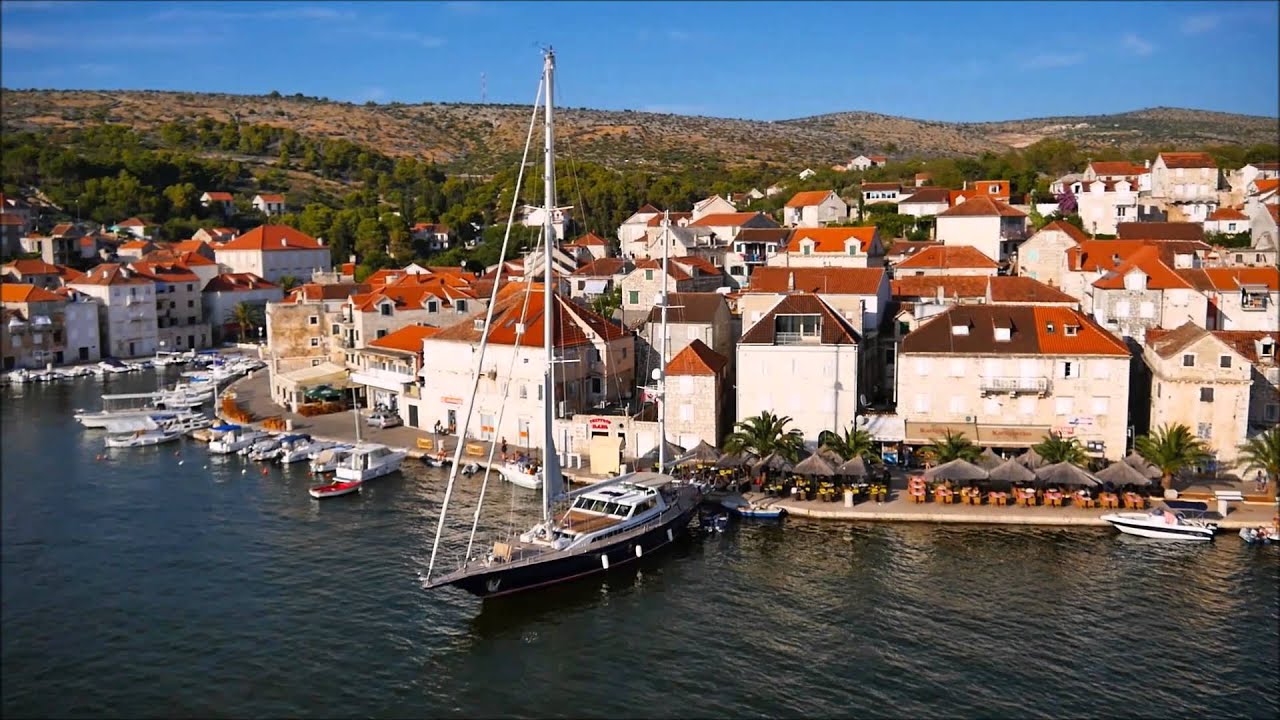 On a second day you sail towards Vis – the furthest island of the Central Dalmatian archipelago. It is especially well known for its cultural and historical heritage. Famous Greek writer Agatharchides praised wines from Vis as being the best he had ever tasted. Their most autochthonous wine is most certainly Vugava which you can try in numerous restaurants and cellars all around the island. 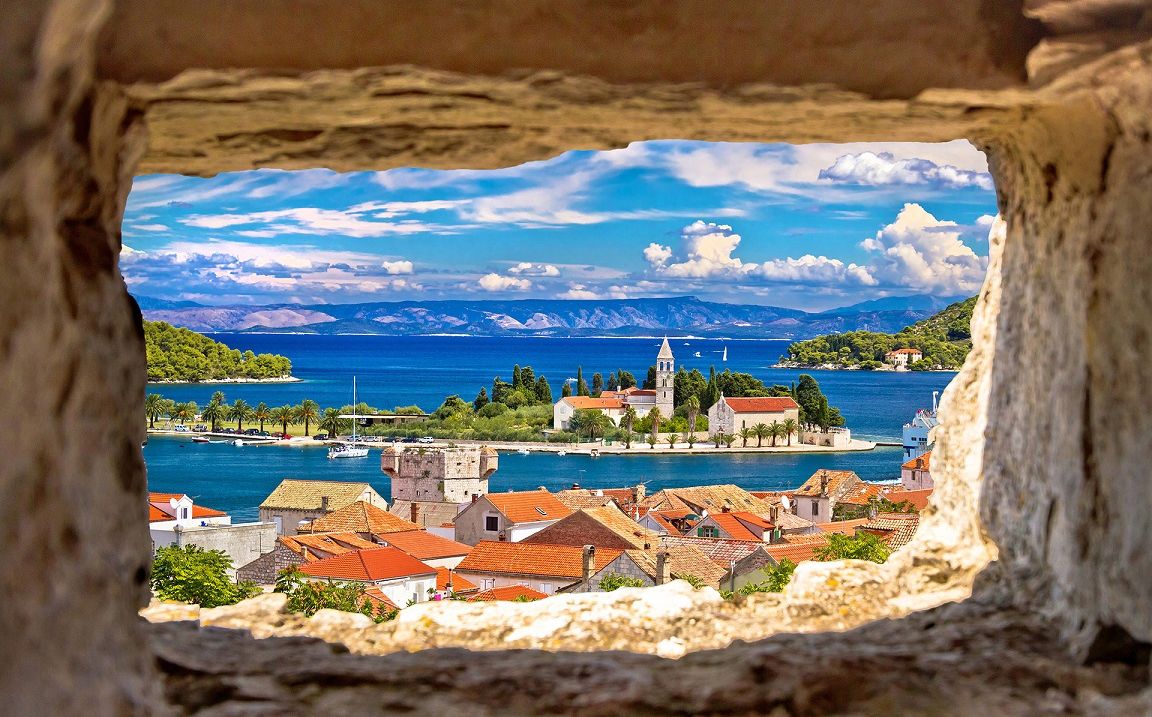 After breakfast you continue your cruise for island Šćedro where you will stop for bathing. Swimming. Along the south shore of the island of Hvar there is another small island of Šćedro. Protected as a nature park, in its untouched beauty, with many hidden coves, it provides an intimate experience to every visitor and once you feel the charm of those quiet coves, sweet aromas of nature and glimmering sun on crystal clear water you would want to stay forever.

You`re sailing to the island of Korčula, more precise the town of Korčula – the birthplace of a famous traveller-writer and adventurer Marco Polo.

For the first time Korčula was mentioned in the 10th century in works of Byzantine historians under the name ‘Stone Town’. It flourished under the Venetian government. Today it`s a town where you can vividly feel the Mediterranean spirit of people who live and work in this mixture of Gothic, Renaissance and Baroque architecture.

After breakfast you continue your cruise for Pakleni otoci (‘The Hell Islands’). It is a group of small islands in front of the town of Hvar. It is a unique and the most recognizable natural beauty of the island of Hvar. In the afternoon or in the evening (depending on your preferences) transfer by dinghy will be organized for you to the town of Hvar.

Hvar is a tourist, administrative and cultural centre of the island. It is worldly known for its wild night life and numerous elite bars, restaurants and hotels where many celebrities enjoyed themselves. But apart from that Hvar is also very well known for its rich cultural and historical heritage and it will leave breathless guests of all age. In one of beautiful Hvar bays we’ll spend the night. 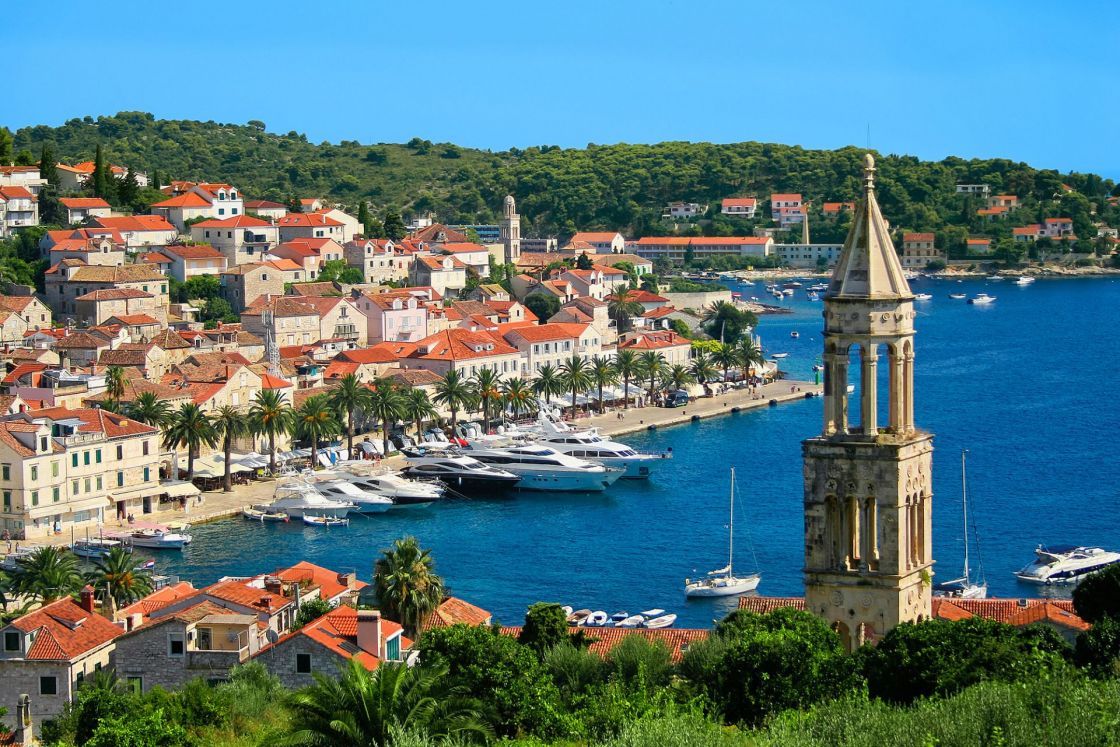 After breakfast you are continuing your crusing to town Stari Grad which is located also on island Hvar. But this town is place for ‘’must to see’’ for following reasons:

Stari Grad (Pharos) is the oldest town in Croatia. The same year – 384 b.c. when greek philoshoper Aristotel was born in Trakia, the greeks from the island of Paros in Agean sea have settled the town on the island of Hvar, and named it Pharos.

Stari Grad (eng. “old town”) is historical heart of the  island of Hvar. The town is situated in a landscape where the blue of the deep bay touches the green of the wide an famous field of Pharos, with vineyards and olive-groves. The fields used to provide sustenance and the bay provided protection.
Today, both the fields and the bay add an attractive quality to the island, in which the modern vacation sights have become intertwined with the antiquities of the town and of the island.

Because of its position in the middle of the Hvar island, for centuries Stari Grad was a safe harbour to sailors, which have been welcomed by town inhabitants on harbour promenade. Stari Grad bay is still regulary visited by most of the travellers on boats passing trough middle Dalmatia. 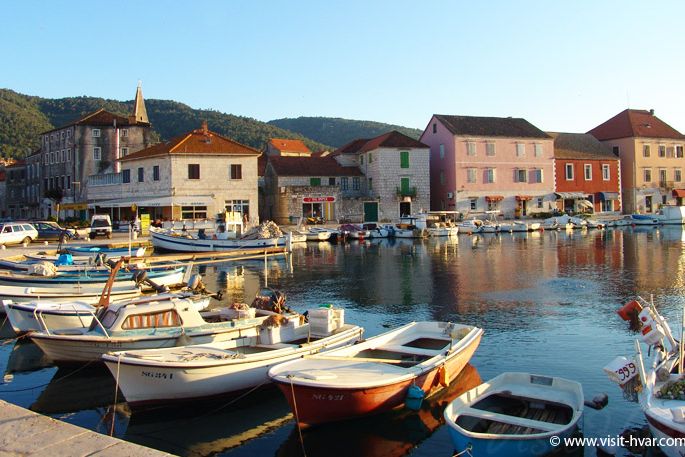 Your next stop is the island of Brač, place Bol. Bol is situated on the southern part of the island Brac, and is the oldest town on the coast of Brac. This little town was founded long ago and became an extraordinary tourist oasis because of the wide gravel and sandy beaches which expands over 10 km and the sources of drinking water. It is not possible to avoid the Zlatni rat, certainly the most beautiful beach on the Adriatic sea, whose cape is turning one moment to one side and the other moment to the other side playing a strange game with the wind and the waves.
Above Bol is rising the coronet of Bols hills, the illlyrian fortress Kostilo (660 m) and the Vidova gora (778 m), the highest top of the Adriatic islands. Bol is only 15 km away from the international tourist and sports airport “Brac”, and excellent connected with the fast lines to the coast, but also with a ferry- line from Supetar.

Pucisca are one of the biggest resorts on the island of Brac. It is located between Postira and Povlja at the bottom of a deep cove. Pucisca is an ideal vacation place far from the city crowds which offers relaxation in beautiful nature. Archeological findings, such as the Jupiter altar and the Roman epitaph, testify about the turbulent history of Pucisca. This resort is slowly becoming the cultural center of the island of Brac. 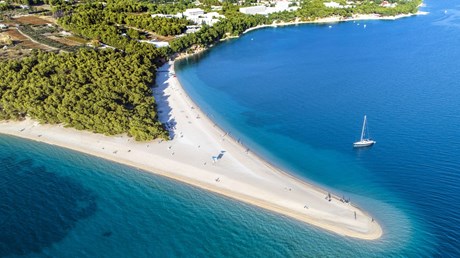 You continue your cruise and you are stopping in place Stomorska which is located on island Šolta. There you can swimm, sunbathing..

Stomorska is 9 nautical miles distanced from Split, settled in deep bay on the island Šolta. After Nečujam, it is the most significant village on the island, thus very well connected by frequent daily boat and ferry lines with Split. Unlike most other villages and small towns in Dalmatian islands, Stomorska has lively days and nights; great tourist offer supported by numerous restaurants, pizzerias and night bars.

After visiting and stopping in place Stomorska, in the evening you are comming back to Marina Kaštela.